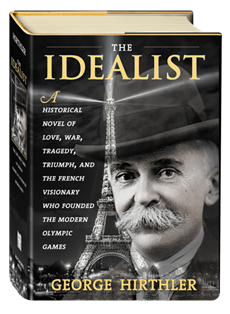 The Idealist is a work of historical fiction that dramatizes the extraordinary life and times of Baron Pierre de Coubertin, the French genius of sport who reached into the vaults of antiquity and resurrected the Olympic Games.

The Idealist—The unforgettable life story of a man who changed the world It’s January 1937. Baron Pierre de Coubertin has just turned 74.  He’s broke, his health is failing, and although he has created one of the most influential international movements of the 20th century, he is completely unknown outside a small circle of admirers.  Angry at their losses, his wife can hardly withhold her bitter animosity, his son is tragically impaired, his daughter is battling mental illness, and his great creation is about to fall into the hands of a Nazi madman leading the world to war.  But hope arrives when a new ally appears.  Jacques St. Clair from Le Petit Journal in Paris, the world’s leading Olympic sportswriter, moves to Lausanne with his American fiancé, the painter Juliette Franklin, to spend a year writing the Baron’s biography.  Once St. Clair begins the interviews, Coubertin is rejuvenated as his story unfolds in scenes that flash back through the past seven decades.  The young couple becomes fully immersed in Coubertin’s life—as Juliette begins to paint the baron’s portrait—and both are deeply affected as his health declines and the race to finish the interviews faces an increasingly impossible deadline.

A historical novel of love, war, tragedy, triumph, and the French visionary who founded the modern Olympic Games
In its narrative scope, The Idealist spans two centuries, covering the 74 years of Coubertin’s life—from his birth in 1863 in the shadow of the Golden Dome of the Invalides of Paris, to his end near Lausanne in 1937. It reveals how the transformation of Paris into the capital of modernity helped fire a young man’s imagination and how the drumbeats of war sounded by the German hosts of the 1936 Berlin Olympics spoiled an old man’s dreams and left him bereft of hope for the movement he created to foster peace among nations.